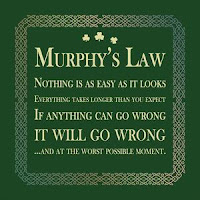 Okay, y'all know I'm a Murphey and not excluded from Murphy's Law, right? Thus is the case of my trial surgery. My surgery time was changed from 7:30 to 9. No biggy. More traffic but we didn't have to get up so early. The two days of rain prior to leaving for Atlanta did pose a problem for making it up the driveway in my van. It meant we'd have to take Mel's 4-wheel drive truck. Mel's fix for me was to build a step out of pallets to make it easier for me to get into the truck so long as we were together.

Now if you've ever been to Emory, you'll know you are dealing with four multi storied buildings with sky bridges connecting them to each other on the second level. Park in the wrong spot and you've got a hike and a half through a maze with various construction projects underway. Guess what we did? It was a fifteen minute hike to get to the right set of elevators. To top it off, it's springtime and so something was pollinating that my asthma didn't like. I awoke with a thin wheeze, by the time I reached the surgical waiting room I was gasping for breath. I had left my inhaler in the truck and a valet attendant parked it God only knew where. 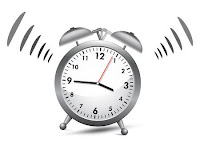 I managed to check-in for my surgery 10 minutes late. So we are sitting there expecting my name to be called any minute. After thirty minutes had ticked by, my name was called. The fellow stopped and checked his computer screen. He turned, apologized, and he asked me to be seated again. The hours passed. I even took my second doses of Baclofen and Dantrolene for the day. Imagine the check-in folks were tired of us checking with when I would be called. Finally, I was next in line. TWO PM! We both could have slept in! I could even eaten something later instead of being NPO (nothing by mouth) since midnight!

I was put into the gown and the anesthesiologist came in to talk to me. I was being prepped for a Baclofen pump trial. This was news to me, so I corrected him. That started a whole new argument with two of my neurosurgeons, the Baclofen pump Dr, and me. Those prep rooms are not very big to begin with me rising to my 10' tall battle stance made it seem even smaller. I felt I was lied to and not been kept in the loop. Two things I despise. I was on the verge of walking out.

Finally, Dr. Au Young, my neurosurgeon for the day, stepped up. He put a calming hand on my shoulder. His eyes told me he understood my feelings. He said the one thing that explained it all. "Insurance requires this step first." This deflated my anger. I understood and agreed.They were placing a catheter in my spine up to the cervical spine. Of course then, respiratory therapy had to be called to control my tightening bronchial tubes before anesthesia.

I woke up in recovery. Everything went fine. Then, they dropped the other shoe. I would have to spend the night. It was too late to do the 8-hr test. GRRR! I told Mel to go home. We had critters to tend to. This had taken far too long already. It was now after 4 PM. We figured Kassity, the new puppy, had destroyed the house at the very least. I hadn't brought anything with me. 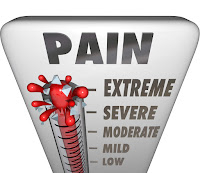 It was almost 9PM before they had a bed for me up on the neurology floor. It was 3 hours past time for my next dose of Baclofen and Dantrolene, but coupled with the additional stress my arm and leg were in full spastic mode. My pain levels were hitting 10 out of 10. All my meds had to be ordered. It took an hour to get 1 Baclofen. I was curled up in fetal position whimpering. On her next neuro check pass, I told my nurse that I want the next two things before the next 30-minute neuro check...my Dantrolene, and something to eat with a Diet Coke full caffeine in that order. One look into my pain glazed eyes told her not to argue. My pain was reduce to a high 8 or low 9 by the Baclofen. I didn't care what hoops she had to make it happen.

If I had known I was spending the night, I would have brought my med box with me. I know how the hospital system works. I eventually had to call for a bed pan. With my AFO stuck in a bag on the couch and the rails up on my bed, what other choice did I have besides none. The nurse tech came in and lowered the head of the bed so I was flat on my back. It's probably the first time since leaving surgery. As I laid back preparing to roll on my side for bedpan placement, it hit me. The dreaded spinal headache. It crept up my neck, around the top of my head to end just over my eyes. There it sat threatening to take my head off. Migraines had nothing on this headache. As I filled the bedpan, I was fighting to hold down the Dantrolene and turkey sandwich the nurse had brought me.

The job at hand complete, the tech took my vitals. I told her to send in the nurse and raise the head of the bed back up. I told the nurse my problem. She asked what I took at home. I told her nothing unless it was really severe. She asked if my headache. I answered yes. She would have to call the doctor and get it from the pharmacy. I settled and asked for a cold pack at my neck. At 3AM, it wasn't worth the hassles. I just wanted this whole fiasco over with. The headache eased off a bit to where it wasn't threatening to blow the top of my head off with the head elevation. This is just the opposite of most people. What can I say, but I'm the Queen of Abby Normal.

About 8ish, the Baclofen pump doctor came in. He apologized for not starting the trial yet. He was waiting on the micrograms of Baclofen he needed for the trial from Emory's pharmacy. This was the same Baclofen pump doctor who said it wouldn't work on me months ago. A real confidence builder, huh? He said if he had known Emory would have so much trouble, he would have brought some from his office across town. Hindsight is 20/20. For me, it was Murphy's Law, but he'd be better prepared next time.

But once again they were withholding my Baclofen and my pain levels were escalating.

By 10, someone had scurried over from his office with the vials. So the trail began.  It would take four hours to reach maximum effect. All during those hours, I wanted it to work. I actually wanted something or anything to work. Surprise, surprise, the pharmacy actually got all my meds. No blood pressure meds or heart meds because my vitals were low and my EKGs  didn't warrant them except when I was in extreme pain. I ran a couple hours of nasty looking strips which is normal for me. After that, my vitals continued to be low until I was able to walk around.

So I waited and tested the flexibility of my arm. I kept hoping to have my arm to flop down besides  me. For me, that would be a successful trial. It didn't happen. Instead at the four hour mark, my wrist moved! It went from a locked 90 degree inversion. To easily into neutral. As far as my bicep and pectoral muscles go, there was enough relaxation for the unparalyzed shoulder to do a partial range of motion. I think to Baclofen pump doctor was as shocked as I was.

When Dr, AuYoung, neurosurgeon, returned to pull the spinal catheter at the end of the trial, he was all smiles. He said the the trial was a resounding success. I told him about my disappointment about not being able to straighten the arm. He retorted that he wanted a rocket ship. Again the hand on my shoulder, he told me with time and hard work it will happen. Baby steps. This was a start. You gotta love this neurosurgeon's bedside manners.

On the down side, there was a slight visual distortion  with the high doses of baclofen being so close to the brain, but no cognitive defects. I'm still playing Russian Roulette being off my blood thinners. I'm still trying to get my energy back. I can't believe how draining this ordeal has been. I'm praying my muscle memory has survived these years of fighting spasticity. Both my thighs feels they are on the verge of cramping and my right hip is still quite painful. They are slow to move also. I'm wondering if it's where they went into the upper lumbar spine.  with the catheter. It's just been traumatized. The baclofen doctor confirmed this later during many of my followup calls. I'll asked Dr. AuYoung to enter the thoracic region next time. The spinal headaches continue. Although they aren't constant now. I think a blood patch will fix this next go around. It doesn't hurt to discuss it.

After almost a week post procedure, these symptoms should have abated by now. The baclofen doctor dispelled this notion. It could last several weeks, but should disappear totally within a month as he swelling and cerebral spinal fluid adjust to normal.

My follow up appointment is the 22nd for a final go ahead on the Baclofen pump, and then intensive PT once again. We've come a full circle in the past two years. I'm ready to move forward and beyond in this post stroke saga.


Nothing is impossible.
Posted by J.L. Murphey at 7:12 AM