I've been extremely tired lately. Four hours of uninterrupted sleep has been the best I can manage. It's been strange but it's been my semi normal sleeping pattern for so long, anything else seems abnormal. Since moving to southeast GA again, I had extended periods of exhaustion. Granted my pain levels have creeped up a bit with the delay of getting botox and the stress of trying to replace doctors are added into the mix making the tiredness I'm feeling almost understandable. Almost.
This boggles my mind. Y'all know me. I'm the never ending cheer leader. The go-getter. The full steam ahead gal. And yet, it's all I can do to get out of bed some days. I texted the family that dinner was ready last night. My daughter came in and looked at me saying, "Ready for bed already?" I responded that I never got dressed in the first place. It was true. I'd thought about changing clothes, but instead after taking my second doses of pills at 11 AM, I had just crawled back into bed and slept until 3PM. I sat at my computer dozing after my third doses of medicines until it was time to take my bedtime meds at 11PM. I crawled into bed and slept until 5AM.
Sunday morning trying to stay awake again. I repeated Saturday's pattern of sleeping off and on. It's been a losing battle.  In fact, this has been going on for a month. This was going on for as long as my heart has been acting up. I saw my new cardiologist on Monday and he said it was unlikely that my fatigue was caused by my heart. Of course the fatigue could also be from the Hashimoto Disease, but without a PCP to order blood work or refer me to an endocrinologist, I'm pretty well stuck. Does the chronic fatigue that happened with my first stroke worsen over time? I never heard of it worsening.
Too many questions and issues to deal with, and not enough answers. Bu then again...
Nothing is impossible.
Posted by J.L. Murphey at 6:30 AM 4 comments:

I had my second podiatrist's appointment yesterday and I noticed something strange about him. He never sits down. There isn't even one of those roll around stools for him or staff in the treatment rooms.

Okay, so I get my toes clipped and smoothed with a roto-tool. No issues with that, but then came the shaving down of the callus which honestly, had become quite painful. The familiar knife twisting in the foot with every weight bearing step pain was back after only ten weeks.  For this procedure he raised the chair as far as it would go and tilted it back as far as it would go. I was in the position of almost doing a head stand. Not really, but it sure felt like it.  Even so, he had to bend his knees to see what he was doing with the scalpel. This was no short man. Later, standing beside him,  My head may have touched his arm pit and I'm five foot squat.

We talked about ways to reduce the callus permanently or at it not reaching this painful status between appointments. I was already doing the moisturizing massages every night. Finally he said a foot transplant. I guess it was a running joke between he and his other patients. But it got me thinking, what if it were possible?

Since the spasticity is caused by a short circuitry in the brain, wouldn't it also effect the new foot? Probably. Darn. So much for that fix. The options of ankle and foot reconstruction/fusion surgery is still on the table as is the amputation above the ankle/foot and prosthetic option. Both are extreme measures to keep me walking on my own two feet without pain and AFO so to speak. But is it too extreme? Or, should I go quietly into a wheelchair for the rest of my life?

Sunday Stroke Survival: Another Week Down 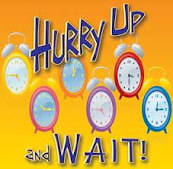 A dat late again .Sigh! It seems it's about all I can do anymore. But time eventually passes. I do keep myself busy to make the waiting go by faster and keep frustration at bay. My project that I've taken on is the family's food provisions. September is Preparedness Month. Actually, I started this project in June.

This house has a 20'x25' pantry with two upright, 27 cu ft freezers plus an additional refrigerator/freezer in it. It was almost bare. I've having fun trying to fill it. I've laid in a couple months of paper goods like paper towels, napkins, and toilet paper. But things like Tampax, menstrual pads, urinary pads, and adults diapers are also stockpiled. Once again, couponing has saved my bank account as I squeeze pennies into dimes. In  fact the $5.00 a week I spend on Sunday papers (2) more than pays or itself in savings. A lot of weeks, I'm buying about $500+ of products for at most $75. My goal is not years or decades, but are least six months with to start with. I've reached my goal in laundry supplies and most of the nonfood goals.

I'm not ignoring the food stock either. Slowly, I've been getting this big city family's going out every other night to grab something to eat, or just buy what they need for a couple of meals at a time to a more home based eating routine. It's been difficult converting them over even with the COVID mess last year. Gone are the half eaten takeout containers to be replaced by real food. Granted some are leftover real food foe them to take for "lunches." It's so much better for them too. I'm not stuck cooking every night either, it's only 3 or 4 meals a week plus the stockpile. 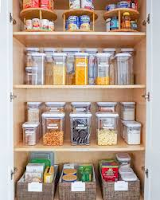 For the stockpiling of food stuff, I'm consolidating what's here by looking before shopping. When I first got here and started cooking. I'd find three or four opened containers of the same thing plus two or three unopened containers in different cabinets and in the two kitchens (2 fully equipped kitchens and a partial outdoor one. Plus a small "snacks" one in the bar area). I wasn't really being nosy, but really?!  I'd be cooling or planning a meal and ask my daughter if she had a certain ingredient and she'd answer, "yeah, somewhere." Then, began a mad rush to find it. I found ingredients everywhere. I reorganized, consolidated, and redistributed all the food prep areas, It was back the way my son in law's grandmother had it. There had been too many cooks in the kitchen since she initially organized it. This also went a long way in filling up the master storeroom too.  I could see what we had and what to buy. It was much easier to keep inventory too. My inventory guidelines are simple. Open one, buy one once you've hit a baseline. To reach your baseline, it's need one buy two or three.

As far as food stuffs I've put by so far, I've canned 6 months worth of pickles, kimchi, sauerkraut, French fries, hash browns (cottage fries), diced onions (dehydrated), garlic (dehydrated), ginger (dehydrated), and assorted commercially canned vegetables. What is lacking is meat. I still haven't found a cheaper alternative to the higher priced grocery option. Meat prices get higher and higher as weeks go by. Although I did lay in about 3 months of mylar packaged, commercial tuna from a killer sale (sale price - coupons=free) . If I'd had more coupons. I would have gone back got more. So the pantry isn't looking so bare anymore. It's a quarter of the way filled. Not too shoddy in a three month time frame.

In case you were wondering, my cost of this stockpile was $581 (I budgeted $600 for groceries each month/$320 a month for household) out of $2,641 for grand total of a 80% savings. You can't tell me that combining sales and coupons doesn't work. And, none of the coupons were doubled, only stacked between rewards, rebate offers, store and manufacturer coupons. Total time spent compiling data necessary to do the deals about ten hours a week. Thank God for the internet and other crafty folks out there! Average number of stores visited and time spent shopping, about 2-3 stores and two hours a week in stores. I'm not a die hard couponer who goes to ten stores to get the deals, or buys unneeded stiff because I can get it for free, and hopefully resell or donate it. I probably would have saved more. LOL Remember, I'm a firm believer in...work smarter, not harder.