Today, I'm talking about pushing the envelope. It's been one of those kind of weeks.

I remember the opening lines of the original lines of Star Trek..."Where no man has gone before" Dum, Dum, Dum.  For the stroke survivor it's, "Where I have gone before and trying to get back to."

As I said it's been one of those kinds of weeks where I wanted to fight against the confines of what is normal. At least, what is normal for me right now. To stretch my boundaries and fly a bit into the previously known. It has been the battle of the caregivers in my house. I'm my husband's caregiver and he's mine.

In thi-s-s corner, is hubby dearest. Guaranteed to go at least two rounds, but as many as four. His record 64 wins out of 200 matches in 20 years of marriage, 60 by TKO and 4 by KO.He is a featherweight division contender at 134 lbs to my welterweight at 150.

Contestant #2, my eldest daughter. She's on a rematch from two weeks before where she fell under the champion's hefty, left undercut to the chin in the first round. She's a featherweight contender at 120 lbs soaking wet in heavy winter clothing.

Contestant #3, my youngest daughter. She's on a rematch from a month ago. Her hilarious Jerry Lewis style footwork had the crowd in tears of laughter, but she punched like a girl without her handy shovel back up. A welterweight contender at 140 lbs with her toddler in tow 160 lbs. A force to be reckoned with.

The champion, me, takes on all comers. She's fearless in her disability. What she has lost in mobility, she makes up with her cunning, practice, and advanced strategy of studying her opponents for decades.

What's at stake besides the championship belt...driving more, chauffeuring, and mobility. 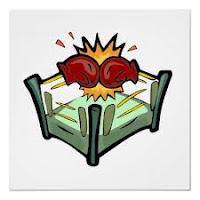 DING, DING, DING
Match #1 Begins
Jaunting Jo opens with the first blow. "Why won't you let me drive on the highway?"
Terrifying Ter counters with, "Because there's too much traffic."
"But I've driven all around this subdivision, one mile one way jaunts up the road and crossed several busy roads including the highway."
Terrifying Ter counters with a blow to the midsection, "In twenty years I haven't had an accident."
Jaunting Jo backs away breathless. "Neither one was my fault and you're forgetting the concrete post you hit."
"Oh yeah," Terrifying Ter whimpers and goes down for the count. "I guess you aren't going to get practice on the highways unless you drive them.
TKO Jaunting Jo.

DING, DING, DING
Match #2
Jaunting Jo opens with a glancing blow. "I haven't heard from you in two weeks."
Combat Cat bobs and weaves. "You know I started my new job. If you needed something you could always call or text."
Jaunting Jo feigns a blow to the head, but punches her in the gut. "You live two blocks away. What happened to Saturday shopping?"
Combat Cat replies, "I guess you can't go by yourself, huh?"
TKO Jaunting Jo.

DING, DING, DING
Match #3
Daughter #4 arrives with toddler in tow. Referee calls unfair advantage because a grandma can't fight with a cute, youngest grandchild smiling at her. She gives the baby to grandpa.
Jackhammer Jen opens with, "What are you doing without your cane?"
Jaunting Jo counters with, "I can walk perfectly fine without it in the house."
Jackhammer Jen hits below the belt with, "You're still healing from the last fall you had."
Jaunting Jo sidesteps the blow with some fancy footwork. "That fall was almost six months ago. My balance is much better now. See?"
Jaunting Jo bends over and scoops up her grandson with one hand from grandpa's lap and walks away.
KO Jaunting Jo. 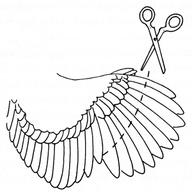 A lot has been said about the difficult road caregivers walk. I know, I am one too. Sometimes they will try to clip your wings to prevent you from flying. Granted they do it because they love you. And as a stroke survivor, I understand the thoughts behind the actions...to recover takes educated chances to try and get better.
For caregivers to be effective they must have...
I went to my first local support group meeting also this week. The stroke survivors and their caregivers seem to have it all worked out although they readily admit to battle of the caregivers, so I'm not alone in wanting to push the envelope. While each survivor had things they just took control over, and their caregiver mostly just stood back and let them. I will admit to being the youngest, as in newest, stroke survivor in the group, my DH, Terrifying Ter and I will work through it too. It will just take time.

I'm going to end this now before I breakout with a off-key, monotone version of "I Am Woman." But, nobody does it better than Helen...