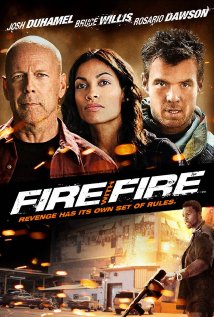 Synopsis
After witnessing the brutal murders of a convenience store owner and his son; firefighter Jeremy Coleman barely escapes with his life. As he is forced to testify against the crime lord, Hagan, he is placed in the witness protection program. When his new identity becomes compromised, Jeremy is forced to take an unexpected course of action in order to get his life back and save the lives of those he loves.

This movie has enough action to keep this action junky riveted. While Josh Dunhamel plays the lead, Bruce Willis plays a more minor roll as a detective. I've been a fan of Bruce Willis since he starred opposite Cybil Shepherd in "Moonlighting" way back in 1985. He doesn't disappoint in this movie with his attitude and demeanor.

Man against man and the question, what would you do if you had no other options to keep your loved ones safe. The answer, what wouldn't you do.
Posted by J.L. Murphey at 6:30 AM