Finally! They Are Doing Something for Me 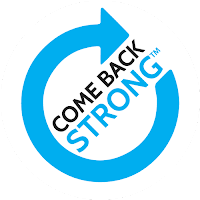 ...well sort of. I opened up my email a little while ago and found a message from the National Stroke Association about their newest campaign, Come Back Strong.

I was surprised honestly. Up until now, the emails were basically about worthless type campaigns (to me) about how to prevent strokes or to ask for donations. If they back this campaign as heavily as they did their F.A.S.T. campaign, survivors like me might actually get some support. This campaign is geared for stroke survivors and their caregivers. That being said, I might still believe in Santa Claus too. But if their plans ring true, it can't hurt.

After my strokes, I got the usual 50 million hand outs from the National Stroke Association (NSA) on the prevention and being able to distinguish the signs of having a stroke. Which is sort of closing the hen house door after a fox has gotten in. If I had printed out the emails I got from the NSA about donating money, I would have killed a tree for the paper and wasted quite a dew ink cartridges to boot. I kept saying to myself and emails to them...what are you actually doing for the survivors? Their answer was... more public awareness meant more money for research.

Strokes and the stroke recovery process is expensive, and it goes on for years. I tallied up what I've spent in co-pays/my share for doctors, therapists, braces, specialty supplies and medicines (so I don't have another stroke and relieve the pain and/or spasticity issues caused by my strokes) since my first stroke...

That's not including my insurance premiums over the past three years that continually rise. That's over $6,000 a year just in surviving my stroke. It averaged out to a third of my yearly income just in recovering. For me, that's almost a year's worth of mortgage payments. How many "normal" people can afford that? Especially with no end in sight. Just imagine what you could do with that kind of money. Me, I've used it to regain what I have now to be sort of normal, and live my life post strokes. Other survivors still fighting to regain abilities are spending about that much if they do not qualify for Medicaid or Medicare. So I'm not alone in this perceived money pit.

I hope that this campaign helps many. I hope that there's some ground breaking information and treatment found for us survivors. I hope it will make a difference. I hope that effective protocols can be established for new stroke patients so that they don't have to go through what we have. I hope for a lot of things. But, the reality is that it probably won't make a drop in a bucket of difference. I could be pleasantly surprised. I can hope, can't I?

Email ThisBlogThis!Share to TwitterShare to FacebookShare to Pinterest
Labels: Come Back Strong, cost of recovery, donate to me not, National Stroke Association