The Rest of the Story

As I blogged on Sunday, I've had some major plans and changes in the works. Now if it seems like this is just a grief stricken, lonely, older woman looking for ways to fill the void in her life, you're partially right.

The plans I talked about have been on the planning board for 12 years in various creations. So it's not exactly a new plan.

Switching from raising just meat rabbits to angora rabbits came about two years ago when I learned how to knit again and later to spin yarn one-handed. I'm forever grateful to Linda at Raverly for that accomplishment. To date I've spun over a pound of Angora yarn. I got Babs/Buddy almost two years ago to experiment with. Yes, I can care very well for the long furred version of these rabbits even one-handed. So when the new rescued bunny presented itself, I had no qualms about getting her.

The tiny house idea was born out of my having too much space and stuff around me in this rambling 2,000 ft house. It just made sense to me. I'm just one person. After going through and downsizing my father in law for his move from a three bedroom duplex into assisted living, I realized that my children would have to go through the same thing when my husband and I passed. My strokes just emphasized the need.

We, as a society, just have too much stuff. I'm no different.  I'm divesting myself of most of it. Notice I didn't say all of it. I'm a minister not a monk. If I haven't used, opened, read, or worn it in three years, I must not have wanted/needed it so bad. At least that's my new rationale.

My girls and I started the process this past weekend. One room at a time. This weekend was my bedroom. What a nightmare. This was the beginning. The first thirty minutes. Most were my husband's clothes. By hour three, we had ten bags total to donate. It wasn't just clothes and shoes. Even my prized Ferragamo high heeled shoes (5 pairs) went into the bags. Like I'd ever wear them again between a torn Achilles tendon and my strokes. (sniff sniff) All sorts of things went into these bags like blow driers (I only had three of them), a portable whirlpool bath, electric razors, jewelry, silk plants and baskets, etc and that was just one room and one huge walk in closet. There's still four closets and two bedrooms to go through not to mention the rest of the house.

Oh, before I forget. In rummaging through the drawers and pockets, we found about $70. I treated myself to dinner but more on that later.

Yes, I could have a spectacular yard sale and rake in cash at $0.50 an item but it only takes time and the will to do which I have neither. Yes, right this minute I could sure use the cash, but I just want it gone. I want this door on this old life closed firmly. Not that I won't be giving it all away, but I definitely have too much stuff.

I've also been doing some fun stuff too.

My next youngest sister by a week (adopted) and my younger biological sister reinvented a slumber party. It was our first one in 29 years. At that time, four of us sisters were pregnant at the same time between just found out she was expecting to ready to pop. Back then, we all grouped up at my place because I had a two-story Victorian with six bedrooms. We ordered Dominoes pizzas and ate each slice sprinkled with hot sauce. Now, we all have grandchildren.

Anyhow, we met at my adopted sister's house out in the boonies. Her ten acre property ensures privacy and quiet. We ate, laughed until tears rolled down our faces, and behaved like a bunch of teenagers, but instead of talking about out futures we talked about the past. We've done some crazy things over the years. Because of various medicines we all are on (hey, we ain't Spring chickens anymore!) we fell asleep about 2AM. They also helped me out with some new makeup and perfume. Ya gotta love sisters. There's something so girly about a new lipstick and perfume. 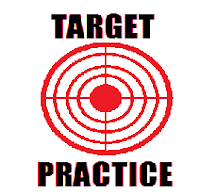 The next morning we ate more pizza with hot sauce for breakfast and went out to her firing range for shooting practice. It had been more than a year since I'd been shooting. I thought I was really rusty because my marksmanship was way off. I couldn't hit anything I was aiming at. Then I had my sister's son spot for me on a paper target. The sight was way off. Once I corrected it, I hit the mark every time. Whew! I actually went out to a restaurant, sat down, ordered, waited on it to
be brought to me, and ate! It's almost been two years since I've done that. I thought it might feel strange to do it by my lonesome, but I was fine. Granted there wasn't my beloved to talk to about what to eat or while I waited. This was the only sad part of the occasion.

I've looked at the loss of my husband as I do about life in general. Stuff just happens. I've got a choice to either stew over it and be miserable until it consumes me, or I can get busy adjusting to my new life.


My strokes may make me take two steps back for every forward step, but I've learned to take bigger steps forward any way that I can so the two steps backwards is more like one step back, or maybe even half a step back. So what if I fall down. I only fail when I quit trying.

Nothing is impossible. Only you can make what is possible happen.

Email ThisBlogThis!Share to TwitterShare to FacebookShare to Pinterest
Labels: dinners out, divesting my goods, living post stroke, slumber party, What else have I been up to