Things that make me go GRRRR! 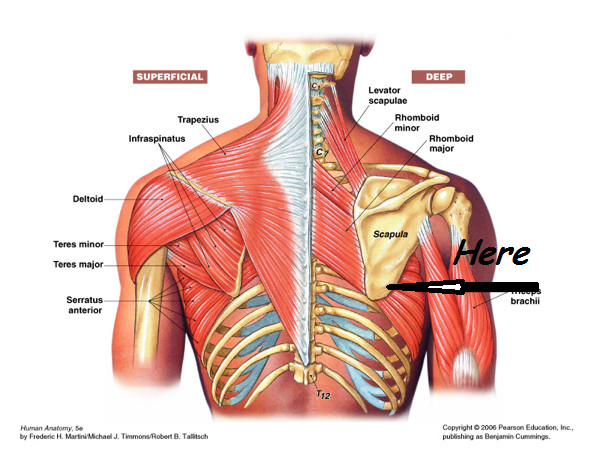 The ignorance of some people! Case in point.

I was in OT yesterday when I noticed my shoulder had a catch in it during one of the stretches. I told my OT about it and she asked where. I pinpointed the spot for her, because I hadn't had it do it before. I'm a firm believer in open communication during therapy.

She said she would try to fix it. Sometimes the muscle kinked under the shoulder blade. She had me roll onto my left side and she began doing a pressure point maneuver around the shoulder blade, and lifting and moving the scapula. No big deal, it was helping.

There was this guy in the next area watching us while he was sitting on a yoga ball working on stretches for his lower back. I know the exercise all too well. He was complaining about the steroid shots the doctor had given him and how he hated shots.

"Women come here and get rubbed on while us men folk have to work up a sweat." He said it loud enough to where half the open room heard him. Even my old PT heard him and looked up from his computer station in the center of the room.

Giving him the benefit of the doubt, and I tried to focus on relaxing my shoulder so the OT could do what she could do to fix the problem, I basically let the comment slide.

He couldn't leave well enough alone. "I'd change places with her in a heartbeat."

Both his PT and my OT looked at him, and told him that he wouldn't trying to defuse the situation from further comments both knowing I was about to responded. He just chuckled, "Sure I would.Y'all just ain't got any idea of what I've been going through."

I probably should have let this slide, but I didn't. I opened my eyes and not raising my voice above normal I asked him, "Really?"

Both therapists looked to the ceiling. They'd tried. They knew what was coming. I'd verbally Jap slap him (as only a Japanese person could do) and make him feel two inches tall.

He nodded his head with the sweat from his exercise emphasizing the motion.

"Yeah, I'll trade your lower back strain for my paralysis and spasticity from my stroke any day," I responded. "It's been two years of therapy, fifteen plus injections every four months, and charlie horse like pain that lasts for hours with no end in sight. Not to mention, relearning everything I once knew how to do. Yes, I'll trade with you any day."

With that I closed my eyes and focused on relaxation. I never once raised my voice above normal conversation tone. There was no bluster or fluster. It was just a statement of facts as I knew them.

Then he really looked at what my OT was doing for me. How she was having to lift my arm and hold it into position while she put pressure on my shoulder blade and the AFO on my leg.

He muttered something about being sorry and he didn't want to trade after all.

I shouldn't have done it, but he ran headlong into my abhorrence of ignorant/thoughtless people side of my personality. My momma always taught me to think before speaking because once something is verbalized, it's out there. Maybe his momma should have taught him that.

Email ThisBlogThis!Share to TwitterShare to FacebookShare to Pinterest
Labels: my pov, rant, therapy