Sunday Stroke Survival: The Ramp is In 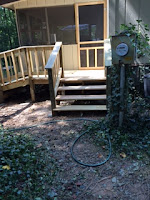 I believe it was a month ago or longer that I mentioned that we were putting in ramps off our porches for easier access for me into the house. Well, one of them is done and it is the Taj Mal of ramps. Or at least cost wise it should be. Building materials especially pressure treated lumber ain't cheap.

I should mention that we started on the back ramp because it would give me easier access to the food storage building and the animals. Well let me say that this one ramp cost me more than I allotted for both ramps because of an addition I made to the ramp in back. So I'm stopping with the one. A deck that would allow a wheelchair or my wagon to turn around on. I will say that the finished product was nicer, stronger, and more utilitarian than I could have imagined.

We held off moving my home canned goods into the storage room until the project was completed. Last night, Mel and I moved 16 cases of goods into the store room. Yes, I've been busy. The garden had a lackluster performance year because of a late cold (freezing temps in May!) followed by a blistering short lived heat wave. But I more than made up for it with local contacts. Not that anybody had a stellar year, but homesteading is a community. I traded off herb for vegetables. I even bought a few cases of produce off local vendors. Next year, I'm hoping not to have to buy anything.


Among the weeds are watermelons, tomatoes, okra, cucumbers, and black eyed peas. But then again, these same weeds like grasses, clover, wild plantain, wild violets, etc offer free food for our rabbits. Nothing goes to waste here. We are stock piling straw, grass clippings, cardboard, and compost for a major revamp of the garden area late fall. We are going to till it and bury the area in about 24" of this extra material. I'm also going to line the area next to the barn drive through with old, molded straw bales and trying for a living fence in the spring.

In the rabbit hoop barn (pictured top left), our injured hen from last winter has a safe and secure habitat. She's got a cage up with the rabbits at night. During the day she has the entire 12x24 area to roam around. We set water and food down for her. She can see the other hens and roosters through the chicken wire clad pallets enough to be sociable, but isn't jumped on by the roosters and hens. I did notice that the twice daily physical therapist I did with her wasn't a complete waste of time. She bear weight on the leg to help support her after a dust bath and long enough to scratch with her fully functioning leg. It's only for a matter of 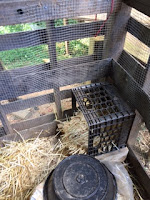 seconds, but she has adapted.  I wish all humans living post stroke like I am the same resiliency and adaptability.

Her new digs even has a nest box just for her. She still gives us an egg a day. This was her saving grace. Otherwise, she would have been culled her months ago. She's so tamed now that even one-handed me can pick her up with barely a ruffled feather. Her head and neck still bears the scars of her narrow escape from the figure with the scythe. Her comb on top of her head is a short, mangled mess instead of her once beautiful comb, but she's a keeper. Like a puppy she comes and greets me whenever I enter the rabbitry.Then, she'll hop up to me and cluck askance for treats. For the past couple of weeks, it has been deer apples that were so bad I couldn't make applesauce, apple pie filling, or apple butter with them. Out of the 65 lbs of deer apples I got for $13, there was about a 3-gallon bucket of bad apples. The chickens go nuts for these.

Well that's it for this week. Remember...