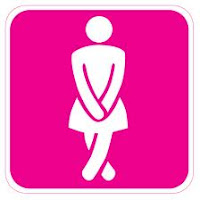 Now I know I'm not the only person living post stroke with incontinence issues. I've heard from a multitude of you. I've done pretty well getting out of diapers and just using a pad.

Being on Lasix, diuretic, for a bum heart just compounds the problem. I usually plan ahead. I'll take my Lasix two hours before I have to go anywhere. After two hours, the main effects of my Lasix wears down from a roar to a meow. But even still, I'll go before leaving home, go again upon entering a store/doctor's office, go again before heading home from shopping/ doctor's appointment, and run into the house to go again when I get home. It's somewhat routine now. Whatever I bought will have to wait until I take care of the issue. I'll leak in between and sometimes I just don't make it.

It's really embarrassing, as an adult, not to be able to control your bladder! When out in public, other people give you a wide berth especially after an accident. They look at you with that "what's wrong with you" look. Hello! does the cane, limpy walk, or one arm frozen in a 45 degree angle give you a clue? Of course, it was an accident. Who in their right mind would want to pee or worse themselves. Even at home and it's just me. I'm mortified. I dutifully clean myself up and put on fresh clothes waiting for the next accident. 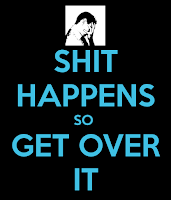 No, I'm not on the self pity pot. I'm stating fact. Doesn't everyone love seeing an adult walking around in urine soaked britches? Do you look at them pitifully? Or do you go about your business? I think most of us would prefer you so the latter. You know the saying, "Sh*t happens" it's true with urine also.

Now in combination with my Dantrolene, Sh*t really happens. I was at the Farmer's Market a couple of weeks ago. I was speaking to the lady in charge of the market about setting up a stall next year. No cramps. No ominous rumble in my belly. The back door flood gates opened. There was no stopping it. It flooded my pad with poo. It ran down my legs and covered my socks and AFO. I halfway expected it to run off my shoes onto the concrete, but it didn't. I excused myself. Totally self conscious, and walked to my car. Every step was punctuating by a renewed onslaught.

I drove the fifteen minutes home wet with the goo being ground into my pores. It seemed like so much longer. At home we had the handyman and his assistant working on the plumbing. Oh great! The water is off! No shower. No flushing toilet. I'd have to use the spare gallon of water to clean off with.

I started feeling off earlier last week. I was more tired than usual. We were only preparing for a hurricane to hit us. You know the vague feeling that something is going wrong with your body but you don't quite know what's wrong. It started with a hot flush one moment and freezing the next. It was followed by that achy feeling. Not enough to stop you doing what you have to do, but just a general sort of thing. I chocked most of this up to missing my medicines one night and according to MedMD they were also side effects for the Dantrolene. I tried to ignore it. It wasn't until there was blood tinged toilet paper after wiping and the feeling like I'd been kicked by a mule in the side a few days later that I knew my problem. I didn't need a doctor or lab results to tell me I had a kidney infection.

Having to wear pads for my incontinence moments, provides a warm, moist environment for bacterial growth no matter how clean you keep yourself. The same with diapers. You have periodic diaper rashes and infections. It's so common place with me that my PCP writes a prescription with four refills every six months. I rarely notice a bladder infection because of my loss of sensation in my pubic area, but there's no ignoring a full blown kidney infection.  So this week I'm battling a kidney infection. I'm happy to report its on the mends. A few days of sulfur always stops it.. Thank God!

It's always the side stuff that goes with any diagnosed problem, like a stroke, that runs you ragged.