I Hear What You're Saying... 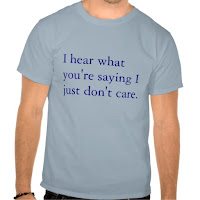 This one says, "I hear what you're saying. I just don't care."

Yeah, it's been that kind of week for me. All week long I've been  snowed under with unsolicited advice.


You ought to do this or that.
Maybe you ought to think about it more carefully.
Let me do that for you.
You really shouldn't be doing that.

Yeah, sometimes I may bite off more than I can chew. Like purchasing five angora rabbits of varying ages in two months time. The grooming of these rabbits take time and energy. If timing had been better, I really would have liked the purchase spread over four or five months time, but when the rabbit you are looking for comes available you have to jump on it. Not that I hadn't planned on a six- hole rabbitry, I did. But there is something to be said for having the time to get to know each rabbit. To train them properly and building trust takes time. 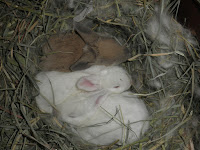 But all that being said, I do have the rabbits I wanted. Granted the fast purchase wasn't without some added expense like the cages and where to put them. On the homestead they would have been in the barn rather than a bedroom, but it works. I had planned on putting new carpeting in the house anyhow. I won't be breeding them until Fall when it's cooler. It will also coincide with the females blowing (shedding) their coat  before they give birth. Angoras can handle cold better than heat. Isn't that true for most of us? Seeing how they are indoor animals than outdoor animals gives them more of an edge.

Yes, it is taking time to get to know them all while not creating jealousy among the first rabbits. It's a juggle like raising children.

Dubu is my self black German/French angora. He's such a handsome boy but very jumpy and a bit skiddish. It will take some added care to bring out a calmer rabbit that I'm sure is in him. At four months old, he is the same size as my two-year olds (Buddy and Clover) and he's still growing. He still sticks his long tongue out.

Clover is my brown and black tort. She is still stand offish but a total joy to cuddle. I could even hold her upside down and she trusts me not to drop her. She is destined to be Dubu's mate. They should breed gorgeous babies with fabulous wool.

Snowball, my BEW (blue eyed white) at five weeks old, is showing signs of being a great wooler and is destined to be Buddy's mate. With both of them having the Vienna gene (BEW characteristic), they have a greater percentage of producing more BEW offspring. Characteristically, she's a cuddler. She loves being handled like Buddy. They will be the backbone of my BEW rabbitry. Right now she's so tiny that snuggling with her is no problwm at all.

Kieran, at 3 months old, is the adventuresome trouble maker of the two brothers. This brown French angora is curious and bold. He's not afraid of much except Lil Bit, the cat. But even so, he will stand on his hind haunches to stare and twitches his nose at her until she comes close, and then he scampers away. Not that Lil Bit would hurt any of Momma's babies.

Colm, the grey French angora, is by far the most mellow bunny I've ever seen. He's a lover not a fighter, but if this trend continues will depend on how puberty affects him. He'll lay quietly on your lap and snuggle in for a nap. So long as he has his brother Kieran is in sight he feels safe. Separating them into side by side cages should alleviate and separation anxiety of the two brothers. At least that's what I'm hoping.

And lastly, Buddy will always be my favorite. My first angora mixed bunny. Loving to a fault and is constantly asking for kisses and ear rubs. Obedient, most of the time, getting in and out of the cage on command. Will search me out if he doesn't hear or see me. My #1 rabbit.

Yes, I could have been more cautious and waited for different rabbits, but I'm happy with the ones I have. I could have waited until all the cages were built and my new homestead before buying them. I could have done a lot of things, but didn't.

My homestead plans are still in motion. Many think I'm foolish, but I see it as a step in the right
direction. More land needs upkeep, but with the plans including a barn, outdoor cook house, and fenced pastures for managed grazing for goats and sheep, if I am careful in the long run, it will sustain itself and me for the rest of my life. Yes, it would have been easier to do if I had not had my stroke and if my husband was still alive and healthy. But nothing worth having is ever easy.

The off-the-grid home makes dollars and cents. Having a tiny house makes perfect sense to and for me. Who really needs all the stuff? More to dust. More to clean. More labor intensive. I've never been a happy homemaker. I love to cook, but how much can one person eat? I'd rather be tending to the animals and garden. Puttering around is what I do best especially with the short attention span I have since my stroke. A little bit of this and a little bit of that. I'll be kept busy, that's for sure but that's when I excel. It will all get done.

In searching for an easier way to wash wool that would be easier on me, a fellow Golden Isles Fiber Artist suggested the ancient method of fermented suint. The dirty wool is soaked in water for a week. Manure, dirt, and the natural lanolin in the wool form a soapy mixture which cleans the wool over time. All that is needed is maybe one washing and rinsing to have cleaned wool. Yes, it stinks to high heaven until it dries but it sure beats temperature variations felting the wool and making it unusable for spinning. When dealing with a whole fleece, that's a whole lot of washing the standard way of 3 or 4 washes each pound.

So for this week, I'm taking the attitude of I hear what you're saying. I just don't care.
That's it for this Wednesday.