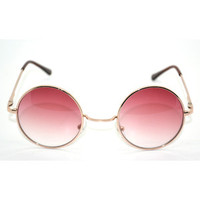 I've been accused of looking at the world through rose colored glasses. Often, it's a derogatory statement from those who do not understand me. If that's what it called to be an optimist instead of a pessimist. I'm guilty as charged.

But that's not saying I'm naive to what's going on around me. It's just a choice I make. I have the know how to look at the big picture and the microscopic when dealing with this world and what it dishes out. I can talk the negative side all day long about heart ache and strife I've been through and am going through. I've been through a lot of SHTF (S**t Hits The Fan) situations in my life. When most people hear even part of my history, they shake their head in wonder that I'm not bitter and miserable. I tend to be prepared for the worst and hope for the best in most things. I've learned to adapt.

Quite often the rose colored glasses get broken. They refuse to let me see things as rosy. These moments I call being on the pity pot, as in self pity. Honestly, who could blame me for staying there? But that's not how I choose to live. It's no fun being there and living like that. Fear, pain, misery, and self doubt are all pitfalls to a happy, productive life.

Sure, I have a heart that's slowly dying and had strokes, but it could be worse. That brings me to my current dilemma. Mind you, I'm not on the pity pot. I'm just telling it like it is.

This week I received an ADL Questionnaire for Social Security Disability AGAIN. I need my rose colored glasses off for this and it's depressing. I can't write it out on the form for two reasons: I can't write legibly and there isn't enough room on two or three lines to explain. It would take pages to explain how limiting my heart is, what the strokes took from me and the fatigue, and how much the pain of my fibromyalgia and spasticity limits me. It would be a book by the time I finished if I include everything. But from what I understand, that's what is needed to qualify for disability. I had someone in an aid referral position tell me to dumb myself down. But I'm honest and there's the trouble. As I see it, I have two choices with filling out these forms: 1) Wait for one of my children, or 2) Type and print it out. I'm leaning towards the latter because my kids don't need to read all of this. It would shock them too bad. How much is too much information? All of this because I'm two years too young for Social Security and my pension!

I am able to do a lot mainly because I'm too pig headed to give up. Take bathing, a pre-stroke  shower took fifteen minutes.  Actually, I was able to shower, put my make-up on, and dress in fifteen minutes before my stroke. Now it takes me forty-five minutes, but I do it. I don't want to smell to high heaven or get some skin disease from uncleanliness. It's forty-five minutes getting into the shower, washing, and getting out. It's another twenty minutes to put clothes on because the exertion races my heart and I have to slow it down to stop the chest pains. If my right arm needs to be scrubbed, I have to ask my children to do it when they come over.

In cooking a supposed 30-minute meal takes me two hours to do, but I do it. I mean I got to eat, don't I? Most times, it's easier to go out and get it. I still have got three pounds of chicken breasts in my freezer that I bought before my husband died. I've got a pantry full of food but even using the can opener or boiling a pot of water is too much trouble when peanut butter or cheese slapped between two slices of bread is all the energy I can muster. That's with a night's sleep and a nap.

How bad is the fatigue and pain? A prime example even if yucky...I went to the bathroom a few days ago, and was too exhausted to reach around and wipe my butt. I even dozed off on the commode for a brief couple of seconds. And, my leg was so spastic that even rising to get off  was a feat done with gritted teeth. I was begging and pleading for the spasm to let up a little bit so I wouldn't fall. Still waiting for the Botox to kick in. I sure don't want raccoon eyes again.

This month, actually two months now, I've been going through mountains of papers in my effort to minimize what I have. I had nice neat little growing piles on my 11 !/2 ft desk. Up bounds the cat. She skids seeing the stacks but couldn't stop. Papers everywhere on the desk, the floor, and I even found a few where they flew into the closet. I bent over and picked them all up and stacked them again. This was after I had a screaming meme fit at the cat. So two hours later, I sink into my chair with my back yelling at me for the effort. The other cat comes in and does the same thing! UGH! The papers are still scattered after two days. I have a paper littered carpet.

Sure I keep rabbits and garden, but it's way different than what it should be. Just the snap, crackle, and pop factor of older stressed bones and muscles makes me want to stay in bed most mornings, if my bed wasn't painful to be in. I replaced my husband with animals. That was my choice or I wouldn't bother to get out of bed every morning. Caring for others keeps me going. Sure, I could have gotten a goldfish, but I know what motivates me. A goldfish wouldn't do not after being my husband's caregiver..

How do you explain all of this to anybody else???? This is some examples of my daily life activities and how it's been affected by my medical conditions. I'll take my rose colored glasses view of the world any day. Do you blame me? It's not because I don't realize what is going on in the world. Believe me, I know. But it's so much nicer with a rosy, positive outlook.