You might have noticed a few extra posts each week that doesn't bear the SSS header in the title. I normally write these Sunday Stroke Survival blogs in advance. Sometimes a month or more in advance as the muse strikes me. Things crop up during that time that I think you might want to know like troubles with my AFO and exciting doctor visits that I can't wait until Sunday to tell you so there are extra posts.

A lot of the time living post stroke, it can be a major brain search to find a topic to write about. It all seems the same day in and day out. Weeks and even months can go by with nothing newsworthy happens. This particular blog has been here since May 2010, but my previous blog began in 1993. So I've been blogging for 25 year! That's a whole lot of blogs and information passed on. I'm amazed that I still have anything to say.

Living post stroke is as exciting or as boring as I want it to be. Sometimes, it's nice to be bored. As it stands there's very few boring moments on this homestead. After a hectic two weeks of getting all the plants  and seeds into the garden before the rains, we were looking forward to a few easier rainy days. 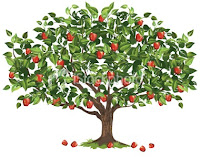 We didn't plan on planting apple trees this year, but I found three trees of clearance. All three trees cost me as much as one tree full price. It was a deal I couldn't pass up. So I brought them home. A full day was taken up me with a shovel and Mel with a pick axe digging holes in the orchard for these trees. Then it was gather rabbit poo and straw to go inyo the holes before the trees. I like to halfway fill the holes with eater before I put the trees in. Twelve gallons of water later, we put the first tree in the ground, then the second, and the third. The four foot metal stakes I had bought for the tomato trellis staked the trees upright. Best made plans and all that. 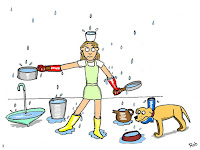 Not all the herbs got planted before the rainy days happened. We still sat on the porch swing and watched the droplets fall. Satisfied with what  we had accomplished. It wasn't until we heard a crash inside and we investigated that the roof was leaking inside. The crash we heard was part of the ceiling falling. Well, we had intended on being bored for a few days while it rained. Sigh! During a break in the heavy rain fall, Mel climbed up on the roof and laid out a tarp. I'm no use on ladders so it was all up to her.

The rains won't stop for a week to see what repairs have to be done on the roof. Inside, I'm making a list of insulation and plywood that needs to be purchased, hung, and painted. The dollar signs are adding up again. Because it is one great room, the living room, dining room, and breakfast room the whole ceiling needs to be redone. The monies I had set aside to gravel in the new car park will be going to the roof and the ceiling now. This will be this year's summer job instead of pressure cleaning the outside of the house and getting rid of the ugly, dark chocolate brown trim and porch. I've wanted to do this for two years. Now, it'll be three years until it's done. As far as I know, the fall renovation project of ripping out the 1980s carpeting out is still on track. But then again, who knows.