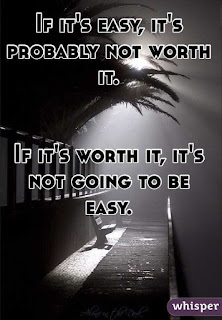 Whenever, when living post stroke, you get a new pair of shoes or AFO (ankle foot orthotic) there's an adjustment period. During this period, there's the breaking in of the new stuff. Whether it's learning how to walk again because your leg has to adjust to the position it's now in, or a different balance point, or you have to wear the brace so many hours off and on during this time.

For me, it's been constant adjustments over the past six years. Whether it's been a new shoes , or AFO every year or every couple of years respectively. I've had a new AFO three times and numerous adjustments because I'm living my life post stroke. Nothing every stops me. It might delay me or slow me down, but never stops me from what I want/need to do.

Sounds like a big hassle, doesn't it? Yes, it is and no, it isn't. Anything is better than not being able to walk. So the hassles are worth it to me. Take my broken foot for instance. I'd just bought two new pairs of shoes back in November.

All the adjustment period to the new shoes was done. I was walking okay, sort of, when I ended up with three fractures in my AFO clad foot. So yet another adjustment period was needed because the AFO or the position the AFO had my foot was in caused the fractures. So something needed to be done to correct the problem. First, a mid sole rocker was placed on my right shoe of my affected foot. So I was learning to walk on my heel with this adjustment. Then, the orthotic practitioner cut the heel bump up for my contracted Achilles tendon down by half. This was a major adjustment to contend with. My Achilles tendon was now pulling and trying to stretch with the new adjustment. It sort of felt like I was walking on a sprained ankle at the end of the day. As a last resort, a new AFO was ordered and fitted.

I began a new breaking in period for the AFO. Wearing it for a few hours each day and swapping it out for the old one in between times. I mentioned the fact that it seemed high in the back and it could possibly cause some problems rising with knee movement to my practitioner when I first tried it on. She said she didn't want to cut down the back because the length was more stable. Well, my mistake, I bowed to her judgement. It was only a matter of days, rising up off the sofa, or any chair that was standard height for a nasty cut to form behind my kneecap. I slapped some antibiotic ointment on it and kept an extra large Band-Aid on it to prevent it happening again. I would address the issue with her in a month at my followup appointment. 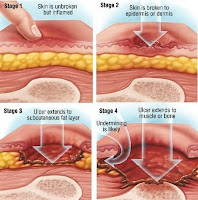 As time went on, I worked my way up to four hours in the off and on cycle. I noticed redness on my foot and ankle. But the redness went away during the off time of the new AFO. Redness is a stage 1 pressure sore if it doesn't resolve. Yes, my foot was straight. I could walk better. I even lost the tilt my old AFO caused in my balance. I could walk upright with very little of a hobble while wearing the new AFO. I loved it! My balance and gait were almost normal.

My therapist was concerned with the redness and played the twenty questions game with me. This session she was working on my foot and Achilles tendon stretches. She massaged the area of redness trying to reduce the swelling and redness as she stretched.  After an hour of this she talked to me very candidly. I shouldn't wear the new AFO until it was fixed. In one spot of three, she gauged the pressure sore below my ankle at a stage three although it had not broken the outer skin. The blister went deep and it was only matter of a short time that it would break the outer skin if not hours. I'm no stranger with pressure sores. The fact that I now have three spots where I previously had none was concerning.

As a previously insulin dependent diabetic, I still pay special attention to my feet. Because of the aneurysms in both femoral arteries, I pay extra special care of my feet because of poor circulation. Although I talked about amputating my affected leg below the knee, I really don't want to do it this way. I also don't want to go through numerous pressure sores either until a thick callus can form like it has on the side and sole of my affected foot.

So yet another trip to the orthotic place is in order. I want this fixed before I develop worse pressure sores, obviously. Also I paid out of pocket for my shoes adjustments, and a couple hundred dollars (the balance of my deductible) for the AFO. It is laying on the foot of my bed while I'm making do with my old one. The good news is that the pressure sores have healed now. I still get that sprained ankle feel at the end of the day. I also have the foot pain like a knife periodically because I'm wearing the old brace. So 7AM Thursday, I'm making the thirty minute drive via interstate bypass and city driving at rush hour to Hanger...more like 45 minutes. I hope they can fix it.