One of the hardest things about living post stroke is combating adversity. I mean carrying on with your life as if nothing devastating has happened is a challenge, right? It's hard to stay motivated when you are talking about charging uphill for years. Now, I can say that because it's almost been six years since my first stroke. I'm still charging. Maybe not with the gusto I once did, but it's still going forward. Even when I'm standing still, it's a battle not to back slide down the hill so that counts. Sometimes, that's the best you can do so stop knocking yourself.

Today, I faced a task, that on the surface, seemed easy enough. I was asked to remove the old door from the well house. The door had split in two and needed to be replaced. Part of me should have known that anything built prior to our move to this property would be cockeyed. That's how we came up with our homestead's name in this first place. Nothing was done properly the first time around. When looking at it, you turn your head to one side and wonder why they did it that way. But honestly, we do things in not the normal way ourselves too, but it works. 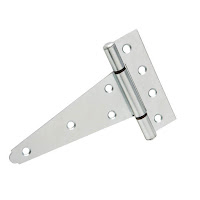 I digress as usual. Back to my story. All the previous being said, how hard could it be? I'm just removing hinges, right? I approached the door, about two hundred feet from the house. I'm armed with a drill, two screw drivers (slot and phillips) and a hammer. I even have a chisel stashed in one pocket because I don't want to have to traipse back to the workshop once I start. I'm ready to do battle. I already know whoever hung the door used gate hinges rather than standard hinges.

I pulled the broken piece of the door away to get a closer look at what was left attached about six inches was left that was hinged to the frame. I put my tools on top of the well house. It's about 4' tall so my tools would be in easy reach without stooping to the ground. See, I'm thinking and doing smarter. I take a look at the screws except they weren't screws, but lag bolts. WTF! Now I'd have to go get the wrench set. But I investigated further still thinking smarter. Not only were they lag bolts but the back (inside) where the bolt came through the wood, the bolts were bent over 90 degrees. The idiot did not use a hack saw to cut the bolt excess off and put a nut on to hold it in place HE BENT THEM! To me this was beyond cockeyed carpentry. I knew at this point, this was a two handed operation. Sadly, I walked up to the porch where Mel was stacking firewood and gave her the bad news. Not that I couldn't have figured a way to straighten the bolts out with one hand, but I couldn't see a way of doing it without causing more damage.

It's one of those days when fighting adversity is me standing still. While loading the wood into the back of the truck to bring it to the house, it was more of me standing still. The cut wood was in an unlevel area and heavily overgrown. I helped where I could but it wasn't much as I watched Mel do the lion's share off the work. Loading the wagon with wood from the wood shed and bringing up to the porch is another story. That I can do all day long, but wood split in the wild part of the acreage, there's just no way for me to do it without falling. I just went along to keep her company I guess because that's all I could do. But now the wood is stacked on the front porch for the wood stove for another week or so.

Now, I'm playing poor, pitiful me blogging instead of sharing the work load around here. I will be throwing some steaks on the bbq for dinner. I'll even roast some potatoes and corn to go along with it. Ooh, if I feel really adventuresome, I might even make some sourdough rolls to go with it. Maybe some deviled eggs too. We've only got ten dozen eggs in the refrigerator. That's the ticket. Move forward uphill by accomplishing what I know I can do. Now for dessert, I can do a peach cobbler. It's only noon, I got plenty of time since I'm not doing anything else.

Combating adversity is a cinch. Not really. When adversity seems overwhelming, focus on what you can do and do it well.