Sunday Stroke Survival: Clean Up and Preparing for Winter

My goodness it's the end of October already! This year, just like previous years, has flown by. Why is it when you are younger times drags. A month until your birthday seems to last years, but now it's zoomed up to and passed so quickly?

October is a rough month for me emotionally. It's our anniversary month and my beloved's birthday. Both of them have passed now so I'm doing better. The only bright spot in it is my youngest grandson's, Murphey, birthday. It's hard to believe he's two years old already.

We were hit by a tropical storm and had a brush by of another one this year. It left us a huge mess on our homestead. Trees, limbs, branches, twigs. and leaves all over the place. So far between Mel and I we've picked up three 4x6x4 piles of the stuff and that's only from the driveway and walkway areas. These three piles have been sorted between limbs that need a chainsaw or handsaw to cut, those we can break into 2' sections for kindling, and twigs also to be used for kindling. We need a variety of sizes to keep our wood stove going for heat every winter and a lot of it. Our wood stove isn't the most efficient model at burning wood, but it keeps us warm on even the frostiest of nights. That's what is really important. All I know is that I'm tired of picking up tree trash and there's still tons more to pick up. We haven't touched the six piles the driveway and orchard clearing made.

I took two tumbles this week. Once out in the yard. My AFO foot foot got tangled in vines and I went down hard. To make matters worse, my functioning knee landed  on a twig which broke on impact driving it just under my knee cap. I managed to get up on one knee, but my functioning knee would not bear my weight. It was severely traumatized and bruised. I had to call for Mel to help me up. Later that same day, my foot got hung on a cat zipping by to get out of my way. Down I went again. My functioning knee is now not only bruised but I got a nice rug burn through my pants leg. I've been hobbling around on it very gingerly for the past couple days. 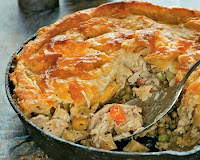 All my hard work canning this summer is paying off. Now, I shop for groceries in the barn (for meats) or the storage building for canned goods and staples instead of driving to the grocery store. It's a lot easier popping a lid off a canning jar than using a can opener to pry lids off cans. Chicken pot pies are a cinch to make with canned chicken and vegetable soup. There's always a thin layer of fat to start the gravy with on each jar. Add some four as the thickener with the broth from the soup and I got gravy. The hardest thing is rolling out the pastry top. It's a quick thirty minute meal once the pastry work is done.

I bought some of those reusable grocery bags for shopping at all places. It makes carrying heavy loads of groceries on my non functioning arm a breeze. Since it is frozen at a 50 degree angle, by spasticity most of the time, I'm making applesauce with a bad situation. But I'll be happier with a functioning elbow again when the functional neurosurgeon gets finished with me. It'll take a few more trips. 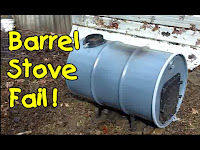 I bought four 4-ft florescent lights for the barn. Now that is a well lit 14'x24' space all year around. It has an old barrel wood stove in it for the colder months. Mel built it to heat the house back when she was One Woman and Two Acres. After a failed attempt to make it work for the house, it was relegated to the barn. Just like everything else, but that's another story. It works fine out there. In fact, it will heat so well that it'll run you out of there just to cool off. A welcome change when there's snow on the ground. I'm just waiting for Tractor Supply to stock some more stove pipe. The single ply pipe Mel bought has rusted through in spots. I may just buy single ply again because it lasted three seasons. It's cheap enough for the metal barn. If it was insulated, it would be better, but I'm not going to that expense.

Living post stroke is adventure nobody, in their right mind, would want. But life is life and it's worth living to its fullest no matter who you are or what you're dealing with. Take it one step at a time and keep going.