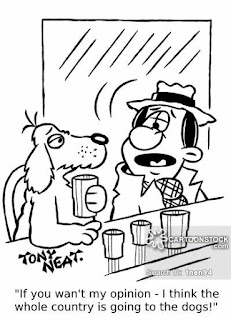 Yes folks, quite literally, today we're going to the dogs...and cats, and rabbits, and chickens, and maybe to those animals known as homo sapiens. Today's topic is animal husbandry after a stroke.

I've moved to a mountain side to be able to keep more animals. With that comes responsibilities. This winter we've had one cat teetering on the edge of meeting his Maker, coyotes and stray dogs killing and maiming our chicken flock, assorted injuries and aging difficulties, and just everyday care of our brood. That's not to say I do all the work, but I do my share. Sometimes, more than my share of the animal husbandry around here.

This winter was a case in point. My roommate suffers with Seasonal Affective Disorder (SAD). She goes into a deep, dark depression as the days shorten. She can't even leave the house for weeks at a time. That leaves all the chores to me. But this is beside the point. With animals come responsibility. As a stroke survivor, most of you, have difficulty taking care of yourselves without the added burden of something else to care for. But I actually feel better taking care of others and not focusing wholly on myself. To me, that's just depressing. Caring for others gets me up and moving. It gives my life a purpose to accomplish. Yes, even so, at times I've bitten off more than I can chew. 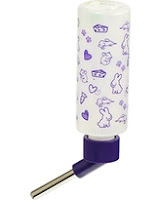 After I feed and water the inside critters- 2 dogs and 5 cats, it time to feed the other critters on our homestead. In this case, for the rabbits it's water bottles to refill and clean. Our water bottles are held in position by springs attached to the cages. Although I've bought the automatic watering nipple for the rabbit cages, we haven't installed them yet. Springs are much better than the conventional wire holder which takes three hands to remove and put it back up. While the lower cages I can balance the bottle with one knee to pull the spring, the 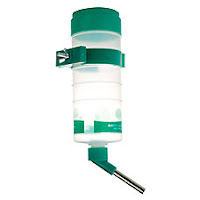 upper cages were problematic. My knee didn't reach that high. I ended up holding the bottle against the cage with my head while pulling the spring. (hoping I didn't catch my hair in the process) I realized the difficulty with these type bottles early on after getting Buddy. So I bought top filling bottles. I didn't have to remove the bottle to fill it. And even if I had to removed it for cleaning, it just slipped back in place. But moving up here, I didn't have enough bottles or cash to buy all new bottles for all the rabbits. The down side to the top filling bottles is that they dripped constantly so I was having to refill them several times a day and clean up the water mess as well. With a total of 15 bottles to fill, it can take upwards of thirty minutes to do them all. Not so bad now, but during winter all the bottles had to be replaced because of freezing twice a day. 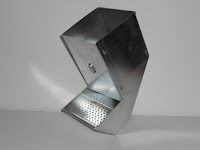 Then there is the feeding of these adorable creatures. During the spring, summer and fall we grow wheat fodder for them. During the winter, it's 100 lbs organic commercial feed a month. Not that I'm complaining. Commercial pellets are an easier feed to distribute. A 3-inch J feeder will supply them feed for two days. Unless Mel's Lionhead/Jersey Woolies are concerned. They detest fodder. No amount of coaxing will get them to eat it. But they are only 1 1/2 to 2 lbs total weight so the J feeder filled will last them a week. So feeding the rabbits is no huge chore except walking down the slope to the outside hutches and the rabbitry. Climbing back up is another story. Let's just say that you burn less calories walking down a slope carrying a 3-gallon bucket of rabbit food (roughly 6 lbs) and a gallon of water (8 lbs) than going uphill at a 20%- 30% incline.

Our four grown hens come when called so feeding them is no issue. I usually do a sprouted grain and organic layer pellet mix for them, and then there is the goodies...leftover vegetables, beans, rice, stale bread on baking day, and assorted other things like grits and eggs leftover from breakfast, etc. Yes, they eat very well plus they free range for bugs and weeds throughout the day. I make sure all the 5-gallon buckets positioned around the house are filled usually with rain water. Like I said the adult hens are easy. 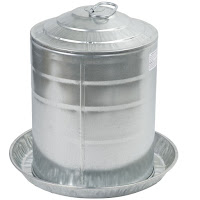 The chicks on the other hand are a handful. They go through 4 1/2 cups of organic chick starter and a handful of granite gravel a day. I'm so glad that I changed out their little feeder to the big one. Each day I clean out their waterer because they poop and kick straw into it. It's a two-gallon waterer so I fill it once a day for right now. We have a young Buff Orpington rooster (I think) that I've aptly named Houdini. He escaped the brooder and was uncatchable for two days. I've since tightened up the wire cover. He's fast. He even out ran the adult hens when they went after him.

Providing none of the rabbits have escaped their cages during the night, this week It's Kieran, my meat rabbit buck off sowing his wild oats. It's time to bake. I'll make bread, cinnamon rolls, danishes, or baked apple fritters. I make full use of Mel's Kitchen Aid mixer for the heavy stirring, mixing, and grinding if I'm making turkey or pork sausage. This I do twice a week. I actually start the sourdough or yeasty baked goods before I go out to the outside critters. By the time I'm finished with them, it's ready to go into a second rise or in the oven.

Then it's on to other chores. The angoras need to be groomed weekly if not twice a week. We have six, so if it's just me, I brush two a day. It will eat up the rest of the morning and early afternoon in a heart beat. Usually, I'll start my prep work for dinner. It takes time when you are doing all that slicing and dicing one handed.

YouTube. So far I'm one of about 60 other channels to participate. It's suppose to start airing the first week in May. I'll be cooking smothered chicken or rabbit in onion and mushroom gravy, green beans, roasted corn on the cob, hot sourdough rolls, with a cool strawberry pie for dessert. I'll do the chicken or rabbit and veges in one episode, the sourdough rolls in another, and the strawberry pie in yet another. What is the deciding factor of which one I'll do, rabbit or chicken? Whatever I have the most of at the time. Right now, it's a toss up. Although the table will be set with all of it. I try to keep my episodes to under 20 to 30 minutes each. Video taping an episode adds an hour in cooking with all the starts, stops, flubbed words, and setting up the shots. I do try to video tape most of what's really good to eat for the channel. Except for those whoops moments when after I prepare dinner I think, 'I should have taped that.' See I'm still getting photos together for my cookbook too.

I don't bathe the animals because they won't behave well enough. I leave that to Mel. Now cleaning pasty butt chicks and baby bunnies, and ear mites, I do. They are little enough for me to work on. But if I had to I would. I'd figure out a way to mummify them in a towel to work on them. I'll scoop and empty cat litter boxes, clean boo-boos on the dogs and cats, and assorted other tasks that go along with owning and caring for animals. During the winter, I was also buffering Mel's emotional storms.

After the sun goes down, we are still busy but multitasking. We are knitting, crocheting, weaving, or spinning while relaxing and watching NetFlix or YouTube. Maybe it's just age creeping up on me but have you noticed that computer monitors are now bigger than our first TVs? Mine is 27" and I was an adult with children before I got my console TV with a huge 25" screen. My first TV was a 10" screen, only black and white, and that was considered a huge screen.

Then, there is the garden. We are still building and planting it in between other stuff like pharmacy, grocery, general shopping, stroke group meetings, and doctor runs. I'm as busy as I want to be by design. When you have this much going on in a weekly, if not daily, basis who has time to feel sorry for themselves living post stroke? I know I don't except for those few seconds as I wake or go to sleep blissfully exhausted, or fall down when trying to accomplish something. Then, I'm right back and at it again. Yes, I'm going to the dogs, and cats, and rabbits, and chickens.

Next week, I'm battling the rats. Both human and animal types.