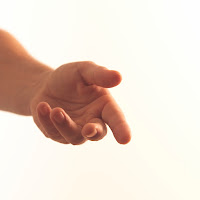 Just because you've had a stroke, it doesn't mean you can't participate and help others. I offer a hand in doing everything. I can only offer A hand because my right hand is paralyzed and spastic. But still, that doesn't stop me.

We recently moved all the angoras out of the present day rabbitry. No, I didn't actually totally move the rabbits by myself because I need my one functioning hand to support me going down the step. That didn't stop me though. Mel got them out of their cages and handed them down to me. I held them like you would cuddle a baby against your chest. They love to be cuddled and felt secure even with my lopsided gait. I had opened the hutch doors before we got started so it was a quick trip around the corner, popping them into their new cage, and fastening the spring lock before getting the next one. Think through the process twice and then do. It saves time and frustration.

It's one thing moving these into the rabbitry but a whole 'nother thing moving them out. In moving them in, I just had to support them, walk to the door, set it down, climb the step and hold them while Mel attached the chain. In taking them down, the cages had almost a year's worth of rabbits living in them. Poo was stuck to the bottom where I couldn't reach to clean them. Rats had built nests under the litter trays and in the insulation in the walls.

Now, I'm slipping and sliding on rabbit poo ball bearings, baby rats, and dodging grown rats scampering to get away while removing these things and so is Mel. I'm high-stepping trying to keep my footing. The last thing I want to do is fall into this mess. Flashes of scenes from Willard danced in my head. Do y'all remember that movie from 1971 or the remake in 2003 or Ben in 1972? Now, I'm not terribly afraid of mice and rats, but still, those movies still give me the willies. You get the idea.

We decided to pull all the wall boards down too after we removed the cages. What a mess the rats made. There was no way I'd be using it for food storage in this condition. I hit upon a brilliant solution to drive them all out and possibly kill them. If not kill them, at least neurologically impair them. Bug bombs. We set off two in the 8x12 storage shed. The results were as I expected. The ones left in the building 100% of the babies were dead, about 75% left of the adults were dying or had some nervous disorders (easy to catch and kill). The other 25% scampered out when I opened the door. Hopefully, they'll die later. We scoured the building with bleach, soap and hot water. Toilet brushes work great for this purpose. I ended up wearing a mask because of the fumes.

I'll admit Mel, with two hands and an able body, did more than I did, but with a job this big, even my one-handed-self was helping. So now all the insulation is stripped, beams and siding are cleaned and sanitized. I'm just waiting for the rain to stop to the call the electrician to rewire it with proper lighting and a separate, a dedicated circuit for the building. It will enable us to run the air conditioning, lights, and plug in the new freezer without tripping circuit breakers in the house. Then we'll put in the new foam insulation and paneling up. We'll add rat traps just in case too. 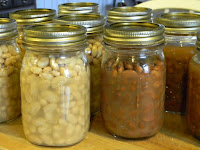 It will be ready for food then. I've been canning quite a bit, mostly dry beans so they'll have a proper home. With just two of us in a household, cooking kidney beans, limas, or any dried beans is almost ridiculous to do for one meal for us. A pound of dried beans makes four meals unless it bean soup. It also takes hours. This way, it's simply open, heat and eat it. It only takes about an hour and half total to do fourteen jars in a canner. A little time now and a little time later. No, I don't lift the canner with hot stuff in it. That would be nuts with one hand. The best part is, it's about 35 cents a jar. Of course, if you bought the jars for this it would be more.

My point is. Don't be afraid to lend a hand if you've only got one functioning hand. It can be invaluable. An extra hand is better than none. So what if you only have one like me. We get the job done. That's what is really important.You never know until you try. Remember, not all first attempts are successful. Keep trying and figure out how to make it work. It has taken me dozens of failed attempts before I succeed at something to make it look easy. Don't give up.