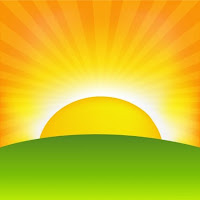 I'm an early riser. I awake before the chickens by at least an hour or two. I spend my first thirty minutes, before my feet hit the floor, in prayer. It's an uplifting way to start my day on the right foot. Or should I say left foot because my right foot is still partially paralyzed and spastic. My cat, Little Bit, demands some one on one time. Then I'll don my socks, leg brace, pants, and shoes in preparation of actually getting up. I'll grab a sweatshirt from the drawer because I know the night fire in the wood stove has gone out. In the predawn darkness, I'll make my way into the dining room after a pit stop to the bathroom. And so begins every morning.

Once halfway in the dining room I'll ask, "Where's my puppy?" Herbie will sleepily come to me for his first morning head rub. I'll walk into the kitchen and fill the electric kettle with water, and then make myself a cup of Earl Grey tea. Some people make coffee, but that acrid liquid hits my stomach and comes right back up. Nobody likes to start the day that way. I'll take my cuppa tea to my desktop to read my emails and watch some YouTube to see what the homesteaders I follow and touch bases with them. I usually will start writing this blog and my other one. (this takes me many hours to complete) I may or may not put on my sweater because the inside thermometer on my desk is registering the temp this morning at 64 inside while outside is a blustering 42. Warm enough for my sweatshirt and keep the chill at bay.

I'll clean the wood stove and empty the ashes from the overnight burn into the outside pile. Since we only use hard woods in our stove, they'll be great for the garden later. They are still some hot embers in this right now so shoveling this into the compost pile is not a good idea. I'll put the pan back under the wood stove and set up the fire for later. Mel will want it warmer in the house when she wakes up. But it will a couple of hours before that happens. I'll be fine with all the morning activities. Besides, I have enough body fat to keep two people warm and insulated.

Every Wednesday and Saturday is baking day. I'll bake the bread we need on the homestead, convert a loaf of bread into french toast, make Mel's crepes (what she calls pancakes), cinnamon rolls, or crumpets. At least get the crumpets, rolls, or/and bread mixed and rising. The excess will go into the freezer for later in the week. I may also make hamburger and hot dog buns depending on the week's menu.

Of course, making bread on our homestead takes some preplanning. Two days before, I'll soak the whole wheat kernels overnight. The following day, I'll rinse it and spread it out on a baking sheet to dry by the wood stove. The next day, it will be ground into flour for whatever I'm baking. It will take about three passes through our manual grain mill to get it as fine as I like it. Yeah, I know I can go to the store and buy my flour, but have you seen what's in that?! Is it GMO? Is it organic? What kind of pesticide or insect droppings or particles may be in it? YUCK!

Next comes the feeding the inside animals. Assorted dogs, get fed half their daily rations per weight. We feed them twice a day. The cats normally have free choice of their dry cat kibble throughout the day except for Devon Angel. This male gets two tablespoons of wet cat food twice to three times a day. He is Mel's special needs cat and is mentally retarded. The reason for feeding him wet rations is simple. All his teeth have rotted in his mouth. He can't chew the dry cat food. He tries but he lost so much weight over the summer, we thought we would lose him. He was literally skin over bones before I started him on wet food with goat's milk supplements. After three months feeding him this way, we can no longer feel his ribs and hip bones under his skin. He's back to his semi healthy state enough to play in the fallen leaves.

After the dogs have eaten and I make sure the other cats haven't nudged Devon away from his food, it's time to take care of the outside animals. First stop is the chicken pen. Not that the chickens are in there. They hear me coming down the covered porch steps and greet me from under the porch. Once the sun rises, they fly out of the coop and run area. They follow me back into their pen for their snack. I usually have leftover bread, leftovers, or stale crackers handy. I'll scatter these and their pellets rations around their run area for them. We do have a chicken feeder, but this week has rained too much to use it. I'm not complaining mind you. We still haven't tarped around the coop or finished the roof yet. So I really blame the chickens for not staying their coop.

Next come the rabbits. Since we have J feeders in the rabbitry, I only have to fill them every couple of days. I'll go into the rabbitry to pet and talk to each one of them every morning. Mel is charge of their watering them. The idea of taking all those water bottles down to fill and them, and hanging them back up is a nightmare. I do the morning feeding and check up, and she does the evening. We split the chores evenly.  The outside rabbits are last. I'll repeat the process all over again. 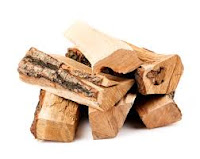 I'll gather the eggs. Since we are in winter mode and it's early morning, there's only about two or three eggs. They easily slip into my pocket. Now, I've gone almost full circle around the outside of the house. Luckily my balance is good enough that I can do this without my cane. I climb up onto the front porch, pick up a couple of pieces of firewood and place them on the small table outside the front door. It's all I can carry with one fully functioning arm. I'll repeat this procedure until I have six or eight pieces stacked on the table. I'll go inside carrying two pieces. I'll drop them next to the wood stove. Then I'll take the eggs out of my pocket and put them in the refrigerator. I'll light off the wood stove, fill the canner pot with water, fill the pet water dish, and bring in the other wood I stacked on the table. By this time, the wood stove is ready to be loaded with more wood. Within half an hour the house is a toasty 76 degrees.

I'll set up Mel's morning tea things. She loves Yorkshire tea with cream and sugar. I'll pour myself another cuppa tea and make myself some oatmeal. Then I'll go back outside and stack about ten pieces of firewood by the door for the next time. Between 9 and 10 Mel will wake up. Her tea will be steeping and she can sit in front of her laptop and wake up. I've already been up for 4 to 5 hours by this time. I'll fix her breakfast and put the bread in the oven. I'll plan what cooking videos I want to film. Hmm, this week I've got to do the promised dog treat/training biscuits and my caramel apple gingerbread cake. Oh, and there's the sugar free hot cocoa mix. Tis the season and all that.

Some time soon, we've got to do a "Tea Time" video. We haven't done one since October. Time flies when you are running around like a chicken with your head cut off preparing for freezes. A list of my prospective video topics will take take us into February next year doing my segments once a week, and then it will be planting season again. Or, at least seed starting season. Our first hard freeze of the year was this Friday. The high was 32 degrees not counting the cold, arctic wind that came with it. It's been quite a few years since I've endured temperatures that low for more than a day or two. That's just winter here. Still not as bad as the winters I lived through in New York, Nebraska, Michigan, or other places up way north of the Mason-Dixon line. 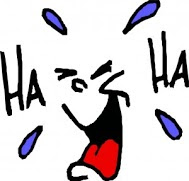 Mel told me to hay the outside rabbits preparing for the freezing. Being the smart butt that I am, I went to each cage waving like a crazy person and yelled "Hey!" to them. Once she came around and saw me with a quizzical look on her face, I stopped and put the required hay in their cages. My Buddy immediately started eating it as did most of the bunnies. I had to repeat the process several times to ensure they'd have enough to burrow in to keep warm. For the really hard freezes we tack up tarps to block the wind.

So how has your week been? Y'all have a blessed week and remember...