Stroke Survival Sunday: Even More on Putting Words in my Mouth

Back in April 2015, I wrote on my expressive aphasia. My goodness! Has it been that long ago? Then again January 31, 2016  and heck, even last Sunday. For someone who has aphasia, I write quite a bit about it. This will be my 78th article.  In case anybody is counting. I'm raising an eyebrow at John over at the Stroke Tattler because he always counts when he searches my blogs for articles. "Beat you to it." :oP He usually sends me a note.

Why you may wonder...because my readers keep asking questions about it. Who are these readers? 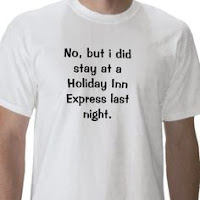 Well, stroke or brain injury survivors like me, caregivers, even a few research study type people, and speech therapy students. But I'm no expert, but I'm living through it like others like me. The only difference is I can talk about it and even sound knowledgeable. Yes, I did stay at a Holiday Inn Express...see below.

The fact is, many folks suffering with aphasia do not have my gift of gab. This stems from my background of being medically trained and an author. Although this blog and emails are about the only things I write these days. My brain just can't handle the workload involved with public speaking and creation of stories. I suppose, one day, I could compile all these blogs into a book, but honestly who would pay for something than can get for free. I write about aphasia because I can. Lord knows, I write better than I speak. That's only because of the delete key and ability to edit.

Having anomic aphasia is a royal pain, for someone like me, but it could be worse. Yes, I still struggle greatly at times trying to find the word I'm looking for but at least I can now get my point across. Even if I have to say every word I know that isn't the word I'm trying to say. A five minute conversation with me could end up being a half hour one depending on several factors like how tired I am, how long I've been talking, or whether or not I'm having a totally screwed up (neurological) day.

For example, my daughter and I had driven up to my friend Mel's house. It was late because we couldn't leave until she had gotten off work in the afternoon. We had both had early starts that day to boot. About half an hour away, we decided we'd stop for the night. Her GSP said the Holiday Inn Express we were looking for was on the right. There was nothing but woods. I looked over to the left where a gas station was and saw a small Holiday Inn Express sign. What I wanted to say and what my brain told my mouth to say was "there it is." What came out was something totally alien. Gibberish. It wasn't even a known language. All I could do was hit her arm and point while she looked at me trying to figure out what I was saying. Needless to say, she missed the turn and had to turn around.

It was another fifteen minutes of trial and error to get words that ANYBODY understood to come out of my mouth. I had to sit down and be quiet. I sipped on a soda while my daughter took my credit card and checked us in.

By the time we got to our room, I could talk again in single words that she understood. This happened three years after I began talking again. It will happen still today. It's anomic aphasia because of my stroke. I'll often use a sort of sign language now with my functioning hand sort of like a one-handed Italian will. Most times, thankful, I can speak just like most folks. Other than a few stumbles with a handful of words, I do just fine. But it's with great effort and forethought. 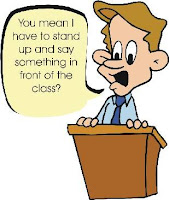 Speaking now is like preparing for a big public speaking gig except it's for every conversation I have with anybody. If I'm at a group function and want to ask a question, I have to prep myself to ask it. If I'm answering a question like, "Where are you moving to?" I have to first visualize where I'm moving to, remember the name of the town, and/or where it is. Then I have to remember how to pronounce it, form my mouth to pronounce it, and then breath just right to form the words. Yes, everyone has got to do this too to speak. It just takes time for me to do it. Most times it will come out in a couple words at a time. "Homestead. North Georgia. Mountains. Cornelia." The usual question after that is "where is that?" So I'll begin again. "By Helen. Hour north of Atlanta."

So you can see why typing on the computer is easier and faster. I got an extreme compliment from a man talking with me on the phone last week. He said, "I spoke fine and he would have never known that I'd had a stroke." It was just a case of everything working right when I was talking to him. I also used simple words and short sentences. That is rare for me right now, but I continue to work on it.

The key is DO NOT settle. Keep working at speaking. If it comes out wrong or delayed...so what. At least you are trying. I don't have Montezuma's Revenge of the mouth. I say what needs to be said and make myself understood. I do miss the general conversations about not much like I used to have with my husband, but that doesn't stop me from interacting with others everyday.  I'll keep on trying to talk normally again and the only way I can do that is by practicing. You know the old adage, "If you don't use it, you'll lose it?" The same thing goes for anomic aphasia. You may have to say ten words describing a banana, but eventually you'll remember what the word is, or whomever you are talking to will know.