Sunday Stroke Survival: The Squirrel Ran Around the Tree...

Know most of us how to tie our shoes. We learned as children. With my own children, I either used the bunny ears or the squirrel-ran-around-the-tree learning poem seen in this video...


Look familiar? These methods haven't changed much in decades.

But all that changed for me after my stroke. I struggled with one handed shoe tying to the point where I just bought elastic laces. It was a cop out and a way to get my shoes on without breaking out in frustrated tears.  Just after your stroke, the least frustrating method is best because you are having to reteach your body how to do EVERYTHING! I know I'm not the only one who felt like they were in somebody else's body and trying to get it to move normally like a puppet master with disconnected strings. In the beginning, I chose what I could successfully achieve. The fogginess in my brain didn't really start to clear for several months and honestly after three years, there are still some issues that don't make sense when attempted.

For me, it was the double whammy of having a stroke and losing the use of my dominant side also.Nothing is ever easy when you are trying to do something with your nondominant side. After all, for me, my dominant side has been in control for over fifty years. If it takes that long to make my nondominant side to become dominant, I'm just out of luck. It still feels awkward. I still mentally picture my right, affected side as dominant even though it's ate up with spasticity and partial paralysis.

Back to shoe tying or bow tying. I have mentioned before that now my stronger learning capabilities is visual. I spend a lot of time on YouTube and Vimeo just seeing if there is an easier way to do things, or how others missing the use of a limb accomplish tasks. Yes, there is also that "not alone" sense of gratification too.  All written instructions read like stereo instructions in a foreign language to me now. Watching a five to ten minute video cuts around dead brain cells fairly easily for me. I may have to watch it four or five times to get it locked into my brain. But that's the beauty of videos,  you can pause it, rewind it, and watch it again. 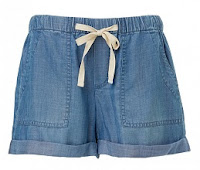 I guess it took me about a full year to even attempt tying a bow single handed. It probably would have been easier with shoe laces, but that wasn't the issue I was having. It was the bow on the front of my shorts. It wasn't because they wouldn't stay up because the waistband was elastic. When the ties came undone, they would hang below the length of the hem. This was especially/possibly a messy situation when going to the bathroom. Plus, it looked sloppy untied. I have enough not going for my looks without looking unkempt too.

So I was sitting on the commode fiddling with it. I had watched several videos on how to tie shoes with one hand. Eventually, I settled on the one shown in this video. It just sort of clicked. There are many such methods so use the one that works for you.

I hobbled out of the bathroom to my husband's hospital bed. I told him to watch. I undid the bow and retied it again. I was like a kid with a new toy!  I was so proud of myself. My hubby went into the cheering mode like he did with our youngest who'd had a TBI (Traumatic Brain Injury). You'd have to see this corny, backward hands clapping motion and him barking like a seal. I'll have to get my oldest to do it on a video to share with you. She does it best except she doesn't have his deep baritone voice. It's something that was uniquely his. A sign of approval and pride.

It was so unusual that the girls had mentioned it at the Pastor's visit before my hubby's funeral. It kicked in my PBA (PseudoBulbar Affect) at the funeral when the pastor recreated it for the mourners present. I went from crying tears of sadness to uncontrolled laughter. I had to stand and touch his casket to regain control.

Anyhow, I can tie my shoes if I ever get shoes with laces on them again.  Right now, Velcro closure orthotics shoes are all I can wear with the special build ups because of my AFO, contractures in my Achilles tendon, and the spasticity in my leg. But in the meantime, I'll keep practicing on my shorts.